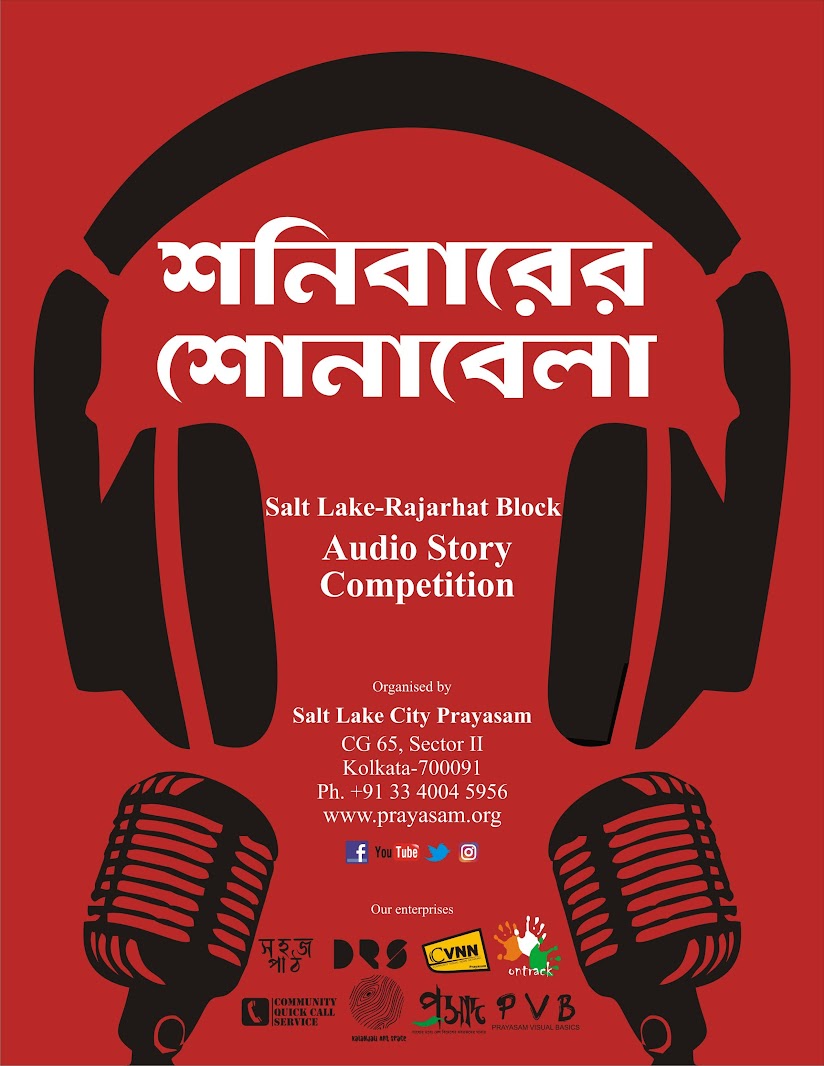 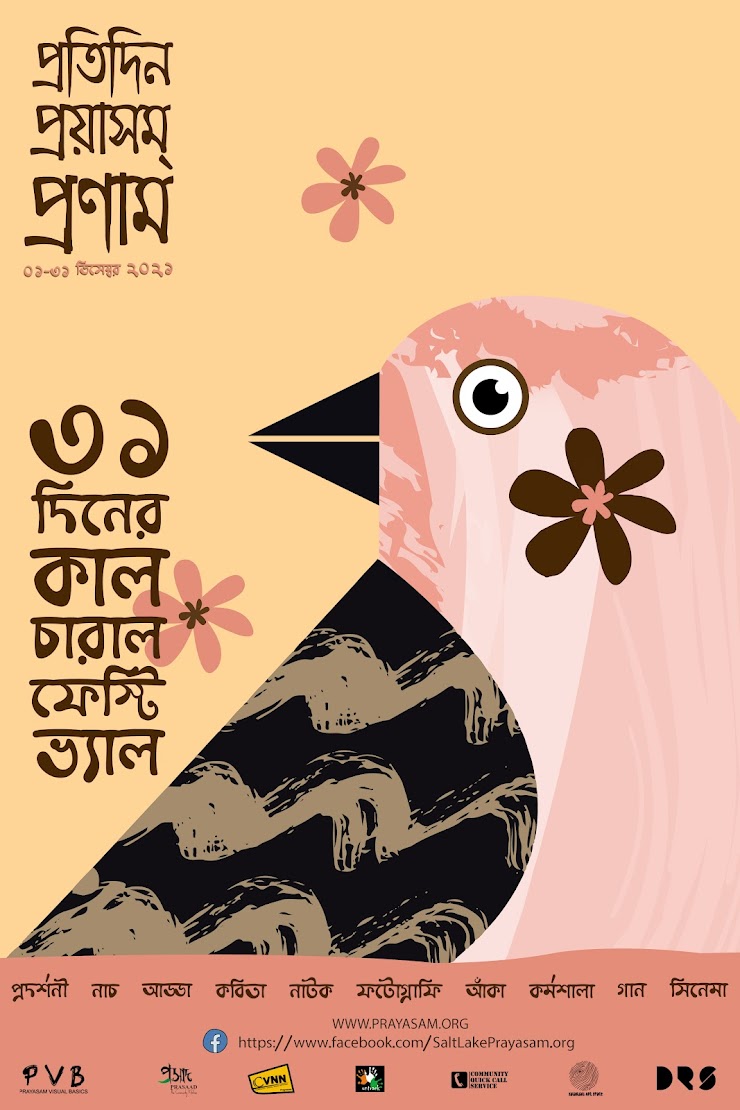 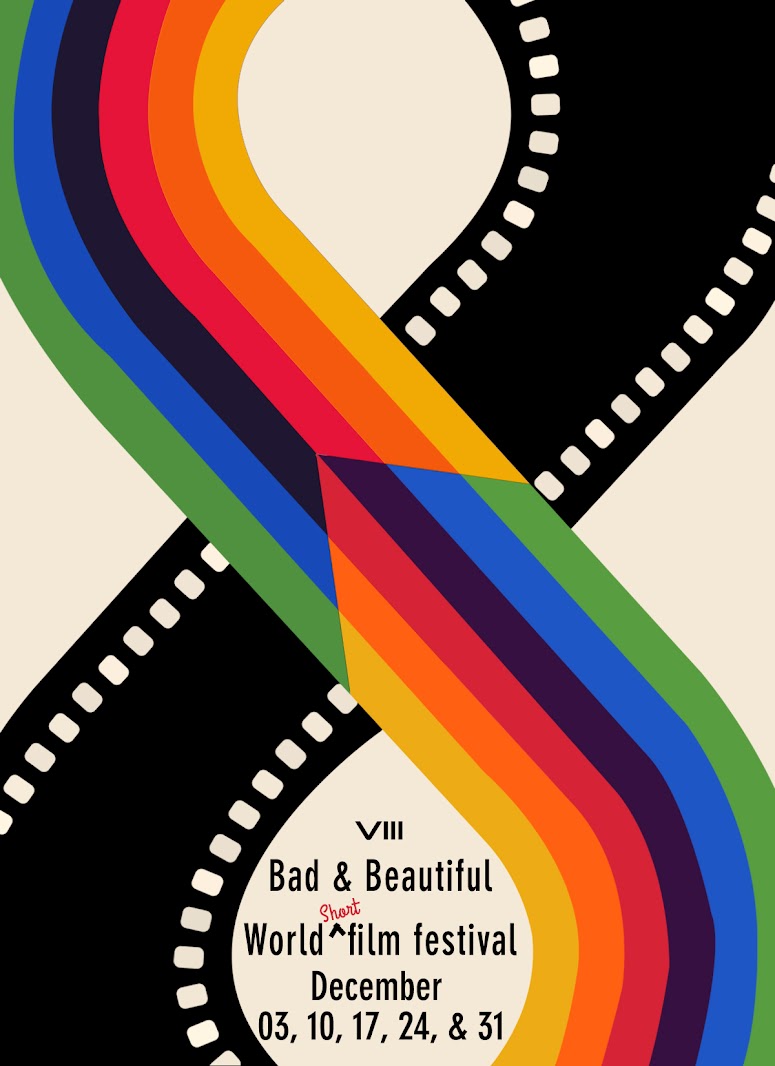 This year the theme for 8th Bad and Beautiful World Film Festival 2021 is RESH (reverberance). The series is titled RESH (reverberance) is an anthology of 8 short films dealing with diverse subjects such as companionship, child abuse, acceptance, penance, identity crisis, and a spectrum of human emotions. A series of related and unrelated tales together linking them in subtle ways and discuss different shades of life. An anthology featuring stories of love, new beginnings, second chances, and a glimmer of hope. Intertwining stories of people belonging to a cross-section of society. An anthology, telling the story of different people, each story revolving around four different elements: Earth, Fire, Wind, and Water. Each film is based on real-life stories.

This year our Panel of Judges include professionals from film industry to IT architect. 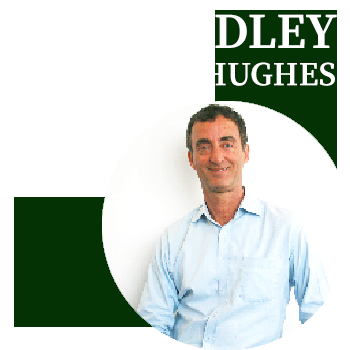 Bradley Hughes is an English language educator, who recently retired as Transnational English Executive at the University of Technology Sydney. He has over 30 years’ experience in the field his specialist areas are curriculum development, teacher training and language testing. Bradley has had an extensive career in Australia, China and Japan and has been instrumental in bringing drama and classical theatre studies within the design of English language curriculum. 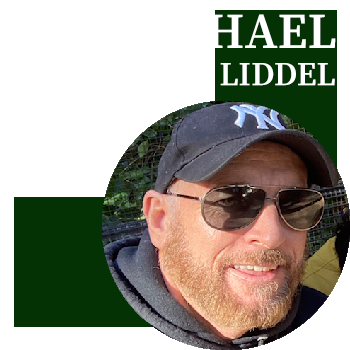 My name is Michael Liddell and I live in Sydney where I work in Science in the food Industry and live with my partner and two fur children.  I am a patron of the arts and have eclectic taste across literature, painting, music, live theater and cinema.  A passion for international travel and outdoor adventuring where I occasionally take the opportunity to paint landscapes in oil or acrylics. 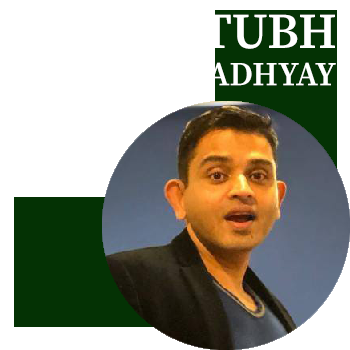 Koustubh was born in a family where simplicity is worshipped and discipline is practiced. Koustubh’s immaculate approach makes him stand out in the crowd. An affectionate son, a caring partner and an affable friend Koustubh Bandopadhyay lives in Australia at present. He believes strong foundation in physical and behavioral health is the mantra to a good life. Koustubh is a senior IT architect by profession. 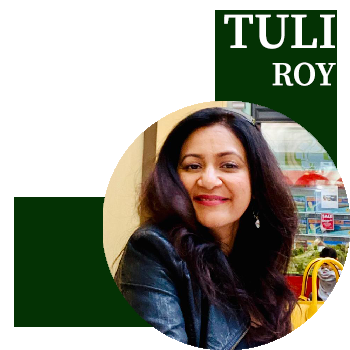 Tuli Roy's personally resembles the mesmerising Dooars where she spent her childhood. A perfect blend of dignity, elegance and empathy, Tuli is loved by the people. Settled in Sydney, Tuli is a molecular biologist by profession and an actress by passion. Tuli Roy is a noted stage name in Sydney for numerous successful productions. 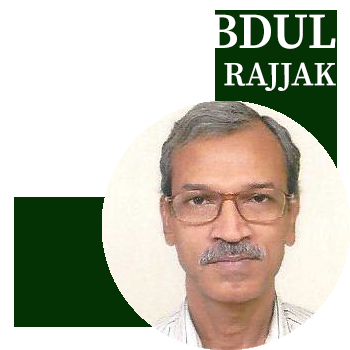 A Diploma holder in Cinema specializing in Sound Recording and Sound Engineering from Film & Television Institute of India, Pune. He is an independent Documentary Film Maker.He has successfully done Location Sound Recording and Sound Designing for several feature films, tele-films, tele-serials and International & National award winning documentary films. Presently he is a teaching faculty in the dept. of Sound for Electronics and Digital Media in Satyajit Ray Film and Television Institute, Kolkata. 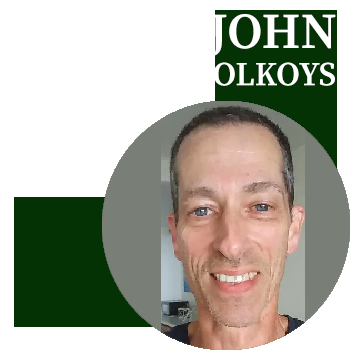 Film lover, started my career working for a production company in California. I've been able to see the growth of LGBT cinema over many years, it's always exciting to see new projects and ideas take fruition. Although we are all facing many challenges, we are so fortunate to be able to watch and enjoy these films. I'm very honored to be a judge of the 8th Bad and Beautiful World Film Festival. 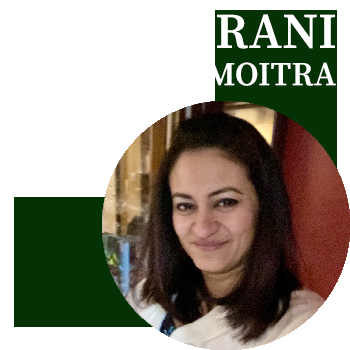 Indrani enjoys teaching, educating, mentoring, and offering guidance in various areas of her community. She believes in diversity and inclusion and practices them as her core values. Indrani loves people from unique backgrounds and she loves interacting with them in different ways. In her free time she enjoys reading, writing, communicating and travelling. Her biggest passions are photography and art. She enjoys using her camera to frame skies and landscapes. From her young age she was heavily inspired by music and movies, and believes that movies can be a strong source of education in modern society. To her, a piece of art should either appeal to the heart or to the brain, but movies are able to accomplish both. Indrani Moitra presently lives in North America with her family, and considers motherhood to be her life’s most fulfilling blessing. 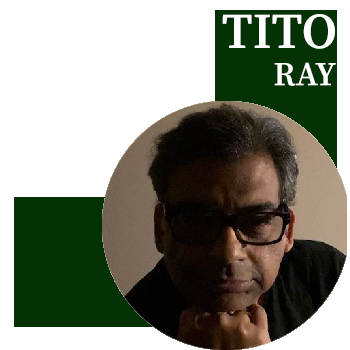 Tito Ray is a director, actor, and co-owner of Kathak Theatre Company. He began his journey with theatre in 1977 when he was in school. In 1992, he moved to Sydney and continued his involvement in theatre by acting in Bengali productions. With Sydney as his backdrop, he further engaged in theatre by creating set, lighting, costume, and makeup design for productions. Tito describes his approach to theatre direction as ‘simple’. He places emphasis on the notion that a production should be spearheaded by the resolution to portray the emotions represented in a script. Tito’s personal journey through life has deepened his understanding of the human experience. With the stage as his canvas and life as his colour, Tito wishes to spread his passion for theatre to the coming generations and teach them about the oldest form of magic - storytelling. 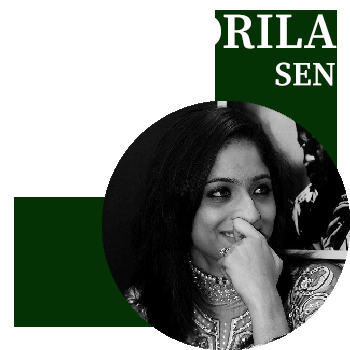 As a kid Oindrila Sen loved to watch films, so much so that she made it her career. She has been a part of the process of filmmaking for the last 6-7 years, and not to brag but she has always worked with the best in business. She has donned multiple hats with ease; starting as an Assistant Director; she climbed high road of creative producing, executive producing and of being a director's assistant. She has a prolific work profile spread across the two most important film-oriented cities of India, Kolkata and Mumbai. Her biodata includes names like Koushik Ganguly, Srijit Mukherjee, Pradeep Sarkar, Vikramaditya Motwane etc. She now works very closely as a core team member of the legend Prosenjit Chatterjee. Oindrila still loves watching films and believes in the quote; "Good films can change a person's life and make it better forever". 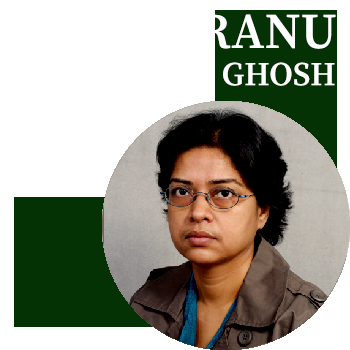 Ranu Ghosh is an independent film Director-Producer-Cinematographer who has experience in both celluloid and video format and doing independent camerawork in documentary and feature Film.

Director / Producer & cinematographer : ‘Dare to Dream’ a documentary film project focused on early marriage of girls & discontinuation of education in Rajasthan!. The film research is supported by Filmförderung Hamburg, Schleswig-Holstein in Hamburg and AJWS, New York, USA. Production supported by Streamline Stories an Audio-Visual Company based at Calcutta.

Her other multidisciplinary project : ‘Dialogue Remains’ an Audio-Visual installation got entry in European Biennale Manifesta-7 in Italy and

Associate Producer, Co-Director, and co-Cinematographer of ‘Like Whirlwinds’, a film supported by TED and Sundance. 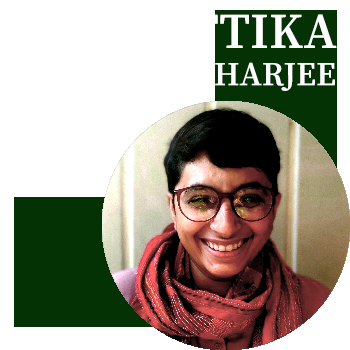 Krittika Bhattacharjee is an actor and writer for the stage, and a teacher at university. She works largely in independent theatre, taking particular pleasure in ensemble work and short-form comedy (or "sketch"). She co-runs the Tadpole Repertory Theatre Trust, a New Delhi-based artists’ collective that emphasises the production and development of new writing by Indian playwrights. Krittika’s most recent productions, pre-pandemic, were the Tadpole Repertory’s Rakshas (2018-2019), and Black Box Okhla’s For The Record (2019-2020).

In parallel with her continued interest in theatre, Krittika works as an Assistant Professor in the Undergraduate Writing Programme at Ashoka University. She has a PhD in Religious Studies, having composed her thesis on how tourists to the Scottish island of Iona interact with its religious reputation. Of late, Krittika has been exploring how to use her academic research method of choice – ethnography – to build lively work for the stage. 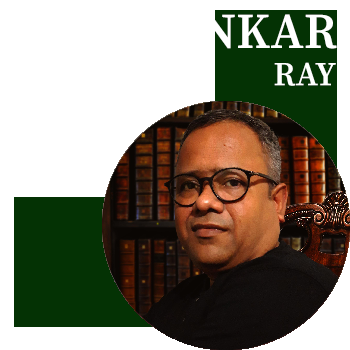 My total film career experience: More than 100 films including Hollywood, Bollywood and Bengali film as a VFX artist pre and post production, I am a fine artist, BFA from Rabindra Bharati University. 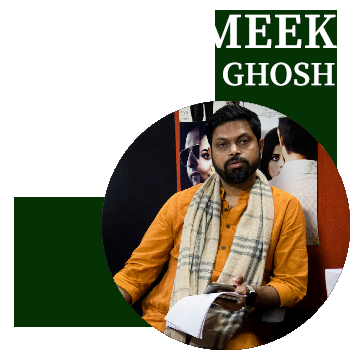 Sameek Ghosh heads Strategic Content and Communications (Press and Digital Media) at the Public Affairs Section of the U.S. Consulate General Kolkata. He is a 2015-16 Abshire-Inamori Fellow (AIF) of the prestigious Abshire-Inamori Leadership Academy (AILA) at the Center for Strategic and International Studies (CSIS) in Washington D.C.  Sameek has a Master of Science degree from University of Calcutta, and a Post Graduate Degree in Mass Communications and Journalism.  He worked as a senior journalist for India’s largest Bengali daily Anandabazar Patrika (ABP) for several years, before joining the Consulate. 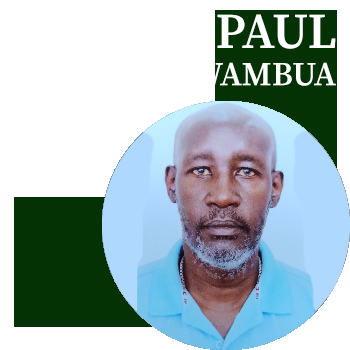 My background is in marketing where I worked for ten years as a director of two start-ups soon after my undergraduate studies. I then felt the need for a new challenge and change in career. My post-graduate studies and aspirations then led to a career at the United Nations as a Programme Officer that started as an internship at the United Nations Environmental Programme (UNEP) in the Division of Policy Development and Law’s, NGO/Civil Society Unit.

The internship opened the way to an opportunity as a consultant at UN-Habitat where I acted as liaison between UN-Habitat, NGOs, youth and other development actors wishing to work with the agency.  I was then appointed as Programme Officer where I worked on research and policy analysis on issues of youth empowerment and employment as well as on administrative duties. Key to this was to support preparations and activities leading towards youth and NGOs participation at UN-Habitat's Governing Councils, and at the World Urban Forums (WUF's). I also contributed to the development of working manuals for the Urban Youth Fund, and the continued to co-ordination of youth, NGOs, municipal governments and other strategic partners towards developing sustainable strategies for engagement with UN-Habitat, at the UN-Habitat supported "One Stop Youth Information and Resource Centre's" in Nairobi, Kigali, Dar es Salam, and Kampala. 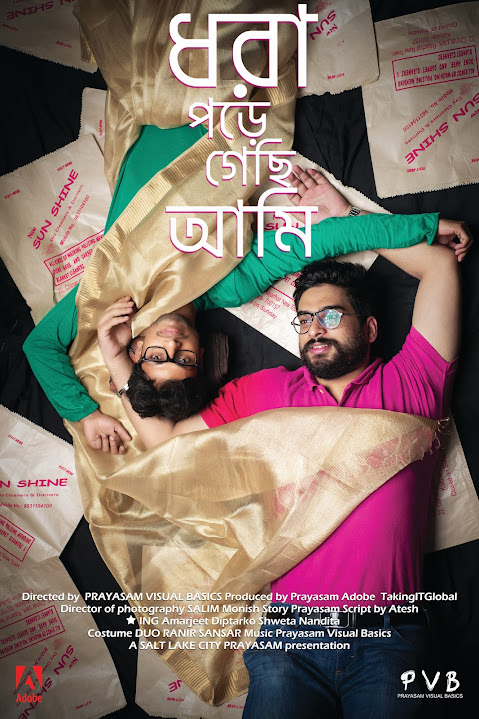 Babu works at his parents dry cleaners on weekend. When a newly married lady and her husband, stop by with their sarees and dhotis, Babu has his own secret desire to dream. 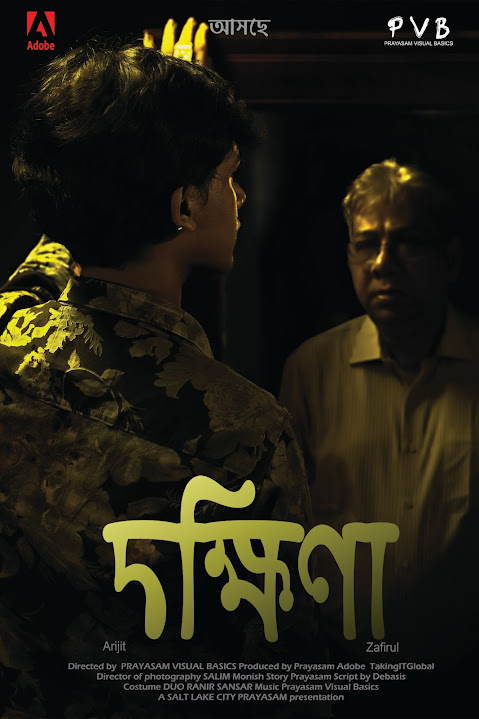 A male escort has an odd encounter with a mysterious man that he picks up.

Ronit is on familiar ground. He knows each man who comes in for his sister’s wedding. But Shayam, his visiting boyfriend, couldn't be further out of place - and there's something Ronit hasn't told him.

SHONIBARER SHONABELA is Salt Lake and Rajarhat Audio Story Competition by Prayasam. Reading short stories has been a part of every Bengali family culture since time immemorial. As we proudly boast of our lineage of Rabindranath Tagore, Manik Bandhopadhyay, Tarashankar Bandhopadhyay, Premendra Mitra, Premchand, Jaishankar Prasad, among many other notable writers, reading stories is gradually a dwindling habit of 21st century. Kindle is replacing books and Instagram reels are becoming our pastime. Besides, pandemic has further added to the already suffering mental health condition of our youth. Facebook, news channels, WhatsApp forwards are immersed in negative news of people dying and the crippling health machinery of the state and world at large.

It is an online competition commencing from 2nd of October 2021 and the three winners will be awarded on 31st of December 2021 at the mega award ceremony of Prayasam’s annual festival Protidin Prayasam Pronaam.

SHONIBARER SHONABELA is an effort of Prayasam for revival of the tradition of storytelling with the touch of digital era, that is, Audio Story. So that it can be a positive diversion to our youth brigade who are glued to their mobile screens throughout the day with no other alternative. At least listening to interesting stories will trigger their creative bend of mind to embark on something positive in their own little way, however miniscule that be.

This is the first ever audio story competition among the Salt Lake and Rajarhat Blocks.